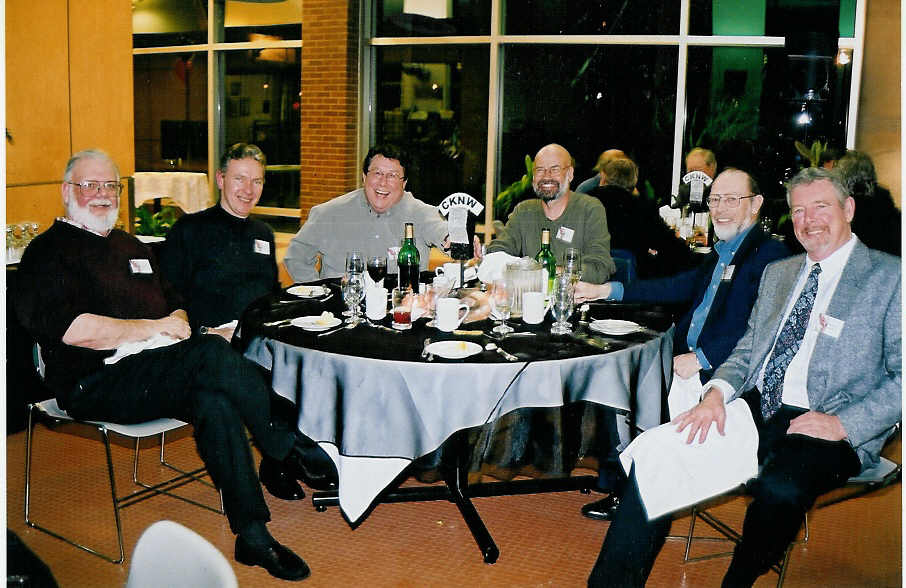 1959 started in radio including

The following are excerpts from magazine articles – most of the information is in ’s own words:

"I had gone through a 10-year period mixing university with radio. I started in 1959 and after a year of radio I thought university looked good. But after six months of university, radio looked good. I bounced back and forth and did much better in radio than I did in university. In the latter stages of that process I was working at radio station CKNW for Warren Barker, who is one of the most unsung heroes of Canadian broadcasting. Another department at 'NW thought the three guys who were driving around as reporters needed only two cars. I was in the process of trying to persuade them to put a third car on the road when a guy from CHAN phoned me and asked if I had been serious when I said I wanted to have a look around. Over the next two weeks I was hired. The reason was that at that time, Ray Peters had decided he wanted an hour-long news program. There were none. There were hour-long programs but they weren't integrated. I believe he felt that the Canadian broadcaster could best fulfill his commitment to prime time by exploring news. So I was fortunately positioned at the time they had a need and that's how I went into television.” had a very successful 20 years at the helm but was sacked in 1989 to the surprise of many in the industry.

“I was escorted downstairs and asked not to talk to Tony Parsons or Keith Bradbury. I gave them my keys, picked up my coat, looked around the newsroom and then I was outside."

"I was the quarterback. I certainly take responsibility for things that were done wrong, but at the time I left I think there were 80 or 90 people and I think we were spending four or $5 million a year, and I'm sure we were making more than that. But it was a large and effective team and there was a clear set of rules, a clear set of expectations. It was the team who did it. Looking back at being fired, I think there were some clear signposts it was coming. But at the time when I looked at those things I felt they were so insignificant and irrelevant to both the news department and to me that only a seriously misguided management could put the two together and say they didn't want me around. So no, I didn't see it coming. There definitely was some disenchantment but it seemed to be over such picayune items that I thought that not even the existing senior management would act on them. And there was never any eyeball-to-eyeball statement that they had abandoned their efforts to make the changes they wanted. In fact, they went through a somewhat celebrated process which is part of the record. They claimed they were concerned about some things. They brought in a consultant. The consultant set up a plan and a process to 'fix' things. I adopted it entirely and the company ignored the consultant's report."

"I really don't know what brought it on. BCTV president Don Smith called me in the morning and said he was unhappy about things he didn't elaborate on and asked me to sign a prepared letter of resignation. I declined because I wanted legal counsel. Smith said they wanted to move. He gave me a settlement figure and said I was terminated.

“I try to make it a point to regret very little in my life. I think the suddenness of my departure from BCTV was the only thing I regret. But it had to be that way in order for me to come out of it with anything. The process of a long, slow divorce wouldn't have been appropriate and wouldn't have worked. I think they had no choice but to follow the ambush course, which is what they did. And if it was done with a view to making a better product for the viewer, I would applaud them. But I don't believe the viewing public in figured in any significant way in the decision to sack me. Ratings were not an issue. Performance was not an issue. And they've never said what was an issue and I've never said what I thought was the issue, because I can't prove it. I don't have any doubts about my theory, but I don't need to make any more lawyers wealthy.”

"There is not a clear understanding that a newspaper or a television news program is a manufactured product for which the raw materials come from different places every day. So you can stand up in many forums and at cocktail parties and say, yeah, we're going to have 40 cameras, we're going to have a lot more news than anybody. Big deal. Technology is not the key to success either.” Since he entered the news field in 1958, says he has watched technology running rampant over content, with people making a virtue out of hardware. Marketing campaigns can't grab and hold an audience either.

Broadcasters have to be original, responsible and build an audience. "That's why BCTV is so dominant today," he says. "It grew up with an audience that it first attracted in the late '60s and early '70s."

As news director of BCTV, 's tabloid news concept put the station on top. The other TV stations could only mourn their consistently low-by-comparison news ratings and watch the big advertisers queue up to spend their money with BCTV. But there was no room in the BCTV executive suite for ; in 1989 he was sacked -- suddenly, without warning. Now he's resurfaced to put his skills to work producing the CBC public affairs program Front Page Challenge in (one more in a string of ex-BCTV staff to join the competition). The broadcast guru has always held strong views about the medium and he's not about to apologize to anyone for any of them. He bills himself as a "consultant" and says he's happy to talk to anyone who wants to buy what he's got to sell.

Thanks to Equity Magazine 1989

Thanks to BC Business Magazine 1993

I take exception to the statement that what we did was 'tabloid.'  I reject that because I think it smacks of sleaze which we were careful to avoid.

Being aggressive and determined and not taking crap from self-serving authority figures doesn’t equate to gossip - real or fictional.

But that's an Equity issue ... and we know what happened to them.  (Maybe it was Karma)