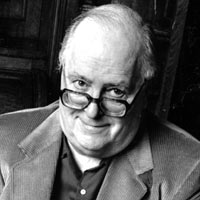 Bob Kerr, a longtime CBC Radio broadcaster considered a pioneer of classical music programming on the network, died in Vancouver April 8/03 at the age of 84.

He hosted Off the Record for nearly 40 years, and became known for his love of music and dislike of poorly produced albums, especially incomplete liner notes.

Each program began with a warm "Good afternoon, friends," and ended with "A fond good afternoon" over his closing theme, the Pachelbel Canon.

"His infectious enthusiasm for the music he played garnered a large and loyal audience, and inspired listeners to explore music they might never have otherwise discovered."

Chalmers called Kerr one of the corporation's "true broadcasting legends."

The program's music came from his own library, which filled two rooms and an entire hall of his home.

Bob Kerr, for 21 years the host of CBC's Vancouver-based Off the Record, had the love of language instilled in him at an early age.

The story, like many Canadian broadcasting legends, becomes embroidered in the re-telling.  In one version, the soft-spoken Bob Kerr, host of CBC Stereo's Off the Record, is supposed to have lost his temper and tossed a typewriter through the window of his studio control room.  Another account has him erupting in rage and heaving the thing at a production assistant.  In fact, Kerr merely pushed a faulty typewriter--one he'd paid for himself--off a table and on to the floor in a quiet fit of pique.  "It was a recalcitrant machine," he recalls.  Kerr, as listeners to his 2-hour show, weekday afternoon program will agree, is a man of many passions.  But his emotional outbursts are invariably expressed gently and reasonably in a voice as mellow as a cello's--whether he's inveighing against skimpy record-album notes, slipshod English grammar, sloppy pronunciation or the surprising drabness of soprano Joan Sutherland's lower registers.

Vancouver Sun arts columnist Chris Dafoe calls him "a classical disk jockey whom people swear by, one of the best in the business, anywhere. "  Given his 34 years as an extemporaneous erudite deejay……………21 of them at CBC Vancouver--and his relentlessly private personal life, it's no surprise that his fans and even his colleagues have built up a few myths about Bob Kerr.  That he's a junk-food junkie, for instance, or that he wields typewriters as weapons.  The truth is just as titillating.  Kerr does adore food but over 6 months recently, he shed 60 pounds from his ample frame.  A 63-year-old bachelor he has bought and lived in 13 different houses in the two decades he has been in Vancouver.  Although a member of the CBC staff, he pays for all his albums for Off the Record; his collection at home numbers about 20,000.  A touch of agoraphobia, a fear of public places, keeps him away from live concerts.  There are times when feels sated with music: "I just don't want to hear it for weeks on end."  While his show is on the air, he does New York Times crossword puzzles.  He admits to a weakness for marches, alpine zither and yodel music and the honeyed voice of pop singer Don McLean (American Pie.)  Given his choice, he would play early 20th-century English pieces on every program.  And despite admirers who treat him as a trained musicologist, he considers himself an amateur.  "I have real trouble identifying the form of a Mozart symphony--unless I'm told."

When I asked to interview him, he remarked, "Oh dear, my life has been so miserably dull."  Bosh.  His parents were part of the pioneering Alberta-Establishment; his father founded Calgary Power and the Eau Claire Lumber Company.  As a child attending a Catholic church in Calgary, Bob was smitten with the physical being of the organ, with what he describes as its numinous, spiritual presence--"an old baroque, rococo organ is a garden" he says.  But he was forced to study piano, on which he became moderately gifted, in later years, he bought an electronic organ, which he played so imperfectly and which sounded so sexless he sold it.

From ages 13 to 18 he endured Shawnigan Lake boarding school for boys on Vancouver Island.  With the emphasis on sports and a strict English public school discipline, it was supremely unsuited to a boy of his temperament.  Shawnigan's saving grace was the feeling for language its schoolmasters instilled in Kerr; he now describes himself, half-seriously, as an oral-erotic and constantly dips into books like William Safire's Old Language and rails publicly against the abuse of English.

His parents wanted him to be a doctor.  With to talent for science, he graduated from the University of Alberta in arts instead, and then went on the University of Toronto until pneumonia sent him home.  In 1943, he joined the Canadian Navy as a quasi-accountant in Halifax.  After the war, Department of Veterans Affairs funds financed more piano study in Calgary with a pupil of Bela Bartok and Kerr passed his Grade 8 Royal Academy examinations.

A woman friend's insistence that he had a radio voice prompted him to apply to CFCN Calgary, where, in 1947, he inherited a tightly scripted light classics program called Afternoon Concert.  Then as Canada's first ad-lib classical disc jockey, he played serious music interspersed with his discursive off the cuff conversation.  He'd interview visiting musicians, and to encourage "the religious conversion to harpsichord" offer free harpsichord albums to fellow enthusiasts who wrote in.  For a while, indulging another love, he had a second show called Prairie Marchpast.  There was no CBC in Calgary then; as Jean Johnson, an 81-year-old retired ranch woman recalls, "out in that part of the country, no one else was interested in that kind of music.  Bob came along at a trying time in my life and I sort of adopted his program as my own.  I was taken by his voice and his approach to music.  He was a friend."

In 1960, Kerr moved to Vancouver and the CBC (Off the Record went national on both radio and Stereo networks in 1973).  When the one-hour Radio version was cancelled 3 years later, a petition with 1070 signatures protested the decision.  But his 2-hour Stereo program (1:04 pm Monday-Friday) survives splendidly.  Kerr prepares for it the night before at his open-beamed, North Vancouver home, which he shares with a Kawai grand piano, 2 harps, an unplayable zither, a colour TV and a videotape machine, 4 turntables, 3 pairs of speakers an Audio Pro sub-woofer for organ music, a Bedini amplifier and two pre-amps, and 2 rooms ceiling high with records.

Auditioning records for the following day's program, he'll usually experience a snapping feeling--"Aha, that's it!"…….yet will tote perhaps 2 dozen albums a day to the studio.  He's still juggling when he goes live to the east coast at 9:04 am Vancouver time; "the program doesn't actually come together until I'm on the air."   Realizing that few listeners read comprehensive reviews of records for which they pay up to $15 a piece, he offers hard consumer information, complaining about lifeless performances, poorly printed album jackets, slovenly pressings.  On a show that featured Shostakovich, he simmered: "Just before going on holidays, I bought this record of the Fifth on Columbia and put it on the turntable and was absolutely shocked to hear all the pits and snaps and cracks and dirt on the surface.  And you could look at it and see little blotches on this gorgeous digital recording. I took it back.  I mean, that's ridiculous."

Everything is spontaneous, unscripted.  Except of course, for his introductory "Good afternoon, friends” and the final "A very fond good afternoon" (phrases his fans force him to resurrect each time he tries to bury them.)  And his opening theme, Respighi's Bergamasca from the second suite of Ancient Airs and Dances and the closing Canon by Pachabel.  The identity of the Canon is the most common request in the more than 1000 letters Bob Kerr receives from across the country each year.  Other fans discuss fine musical details, remark on linguistic matters, reply to the host's casually put questions, or simply thank him for existing, as a 12 year old Vancouver did not long ago:

"I was off school on Tuesday, April 7, on account of being sick.  I listened to CBC all morning while my mom was at work.  She has a part-time job, so she came in the middle of your "Off the Record."  Suddenly, without a bit of warning, she jumped up and started to twirl around the room, her dress flying around her.  You could see her pink slip underneath her dress.   Afterwards we sat down and sorted photographs, listening to your program the whole while.  So, in closing I would like to say, "Thank you for being there, and making my day more exciting."